August has been an interesting month to say the least, but instead of discussing politics this week, I’m celebrating the 90th birthday of my mother, Marie. She was definitely ahead of her time – she was a journalist, teacher, and librarian as well as my mother. The most unusual thing about her though was that she was a woman Marine in the early 50s.

She became a Marine by mistake. Her mother thought the recruitment telegram upon Marie’s graduation from college was a draft notice. So my mother told all her friends she was being drafted into the Marines. No one amongst her family nor friends seemed to know that the Marines have always been a volunteer force. And no one seemed to register that the U.S. has never drafted women. She volunteered because she had told everyone she was going to be a Marine and she was too embarrassed to tell the truth. Plus, it was a way to be paid to move from Knoxville, Tennessee, to the Big Apple and she had always wanted to live in Manhattan.

A typical Southern belle to the outside world (but with an internal core of steel), she truly tested her sergeants during Officers’ Candidates School at Quantico. She was known for marching her platoon into the Potomac because she said “Stop” instead of “Halt” so the first row got wet boots until the drill sergeant issued the correct command. She would put all her uniforms in the Chinese laundry on Friday and then be borrowing furiously when a snap inspection would be called on Sunday. 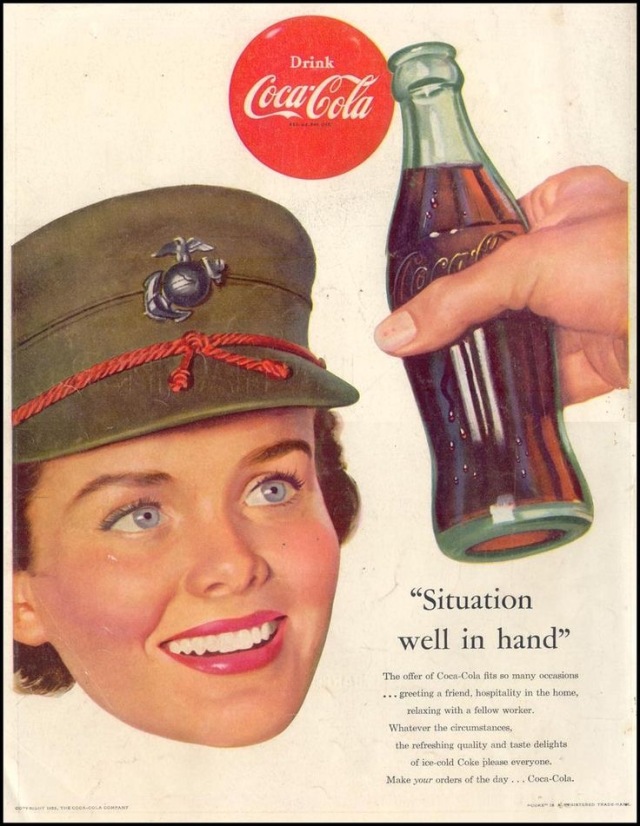 The Marine Corps graduated her anyway and sent her to New York to be the public face of the Corps. She appeared on “What’s My Line” and “To Tell The Truth” as well as numerous game shows (which she said were always rigged). She was the Coca Cola Calendar girl in 1953. It was while she was in this post that she met my father who was her boss. In today’s world, they could never have dated.

When she married, she had to resign her commission. Because in those days Women Marines not only couldn’t be in combat but had to wear girdles and stockings (no wiggling please), but they couldn’t be married or, Heavens forbid, ever be pregnant. How the Corps has changed!

So from a double Marine brat, Semper Fidelis, Mother, and a very Happy Birthday!