Competing at the World Equestrian Festival 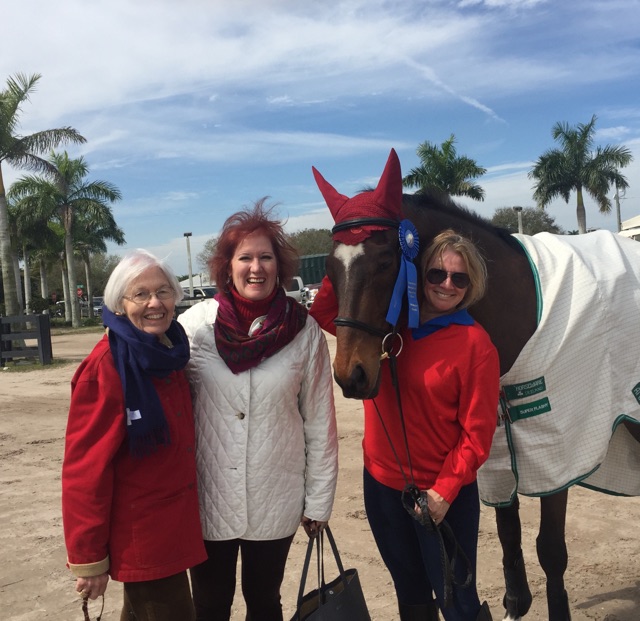 World Equestrian Festival (WEF) in Wellington, Florida, is one of the top horse shows in the world. It is where the American Olympic team practices and is winnowed down to the few that go to the games. It is a massive facility and a place where competition is taken so seriously that most of the horses and riders look miserable.

Into this very proper and very particular crowd, we arrive.

My horse is a thoroughbred which was a breed that used to be very popular, but in the last 20 years has become an afterthought for many who have switched to the European big warmbloods (with the exception of racing on a track which is still thoroughbred territory). Thoroughbreds are hotbloods, which means they are agile, fast and spirited, according to the dictionary definition. If you get the right one and treat him or her well, you also get one of the hardest working, most loyal horses on earth. I have been lucky enough to be picked as the owner of one – because he truly selected me.

His barn name is Super Flashy, so called because he has a beautiful blaze on his forehead and he is super. After seeing him run his last race, he decided he was going home with me. After six years of superb training by Meghan Michaels and jump training by Sandy Lytle, we decided to bring him to Florida for the cold month of February to just see how he would fare at WEF. He fared beautifully. We created havoc by having the attitude of “Rules are Made to Be Broken,” and for all of us to have fun, including him. 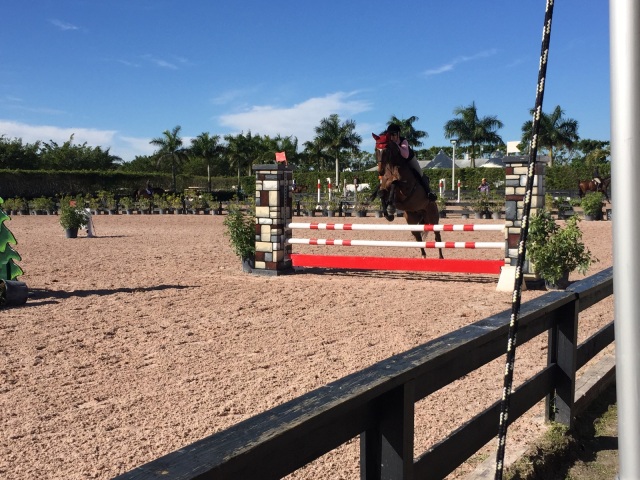 The long and short of it was after hauling him to the grounds we had to finagle all the rules to even get him in since I hadn’t known that one was supposed to have a stall on the premises in order to have a trailer on the grounds. (Merely a way to add to the cost of the show and line someone’s pockets, of course.) We, needless to say, found a way to get him there, keep the trailer there, and to let him compete. Even though we had entered different classes based on their listed times, the times would change and suddenly he’d have to show with a 5 minute warm up instead of half an hour. True to his nature and Sandy’s great riding, he performed magnificently in three classes and won blue ribbons (for the non-horsey set this means First). And to his credit, those who have been in the horse world for many years, were thrilled to see a thoroughbred back in jumping competition. He did not compete in the Thoroughbred-only classes but competed in Open classes, which meant he was up against warmbloods. (The Thoroughbred Only classes were inconvenient to our schedule and few and far between, but I am very happy that there is a movement afoot to bring these magnificent creatures back into popularity.) 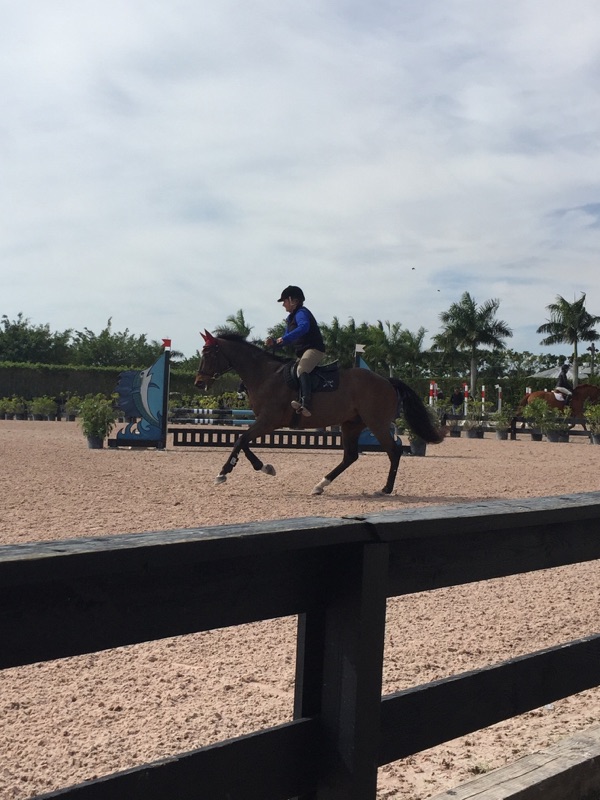 Unlike many of the other horse and human faces, ours were smiling and laughing as we wandered around and solved minor issues, such as forgetting to pack a bit for his bridle (a beautiful Hermes one that I had cleaned but forgotten to attach the bit back.) And, of course, the screwdrivers made with fresh OJ helped our attitudes as well. Super Flashy got peppermints and horse cookies to celebrate since vodka is not known to be helpful for horses. We now have friends everywhere there and are looking forward to the next time we wander into the show. Super Flashy is a people horse and his fun was not only competing but checking out motorcycles, golf carts, and all the other horses and people.  The event is so large that we know there have been at least 6,650 riders since that was Sandy’s number – and they are only in their fifth week of shows. 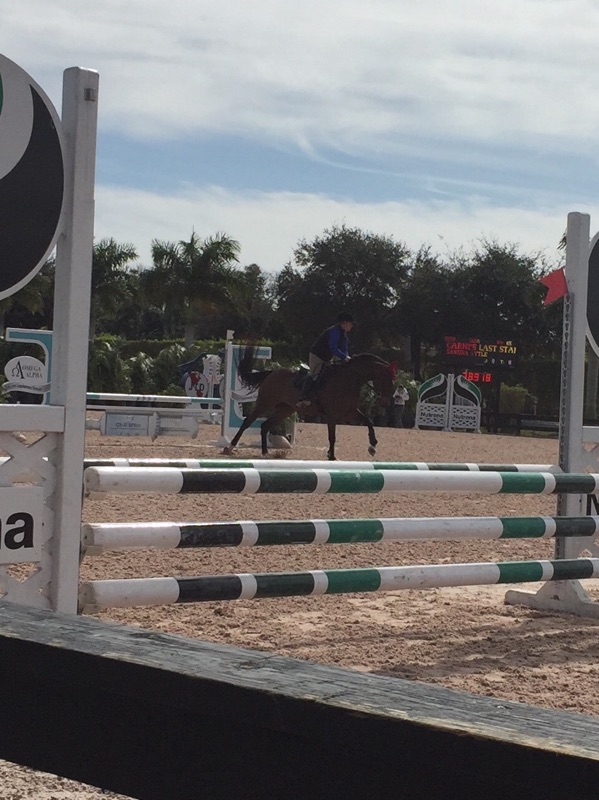 Wellington itself is a spread out area with massive horse farms and homes as well as riding arenas and polo fields. Most of the houses and buildings are fairly new – with the past 25 years. Polo is a major sport here and the International Polo Hall of Fame is located in the town.

Beautiful grounds and gardens flourish in the weather in Wellington. And new restaurants are popping up all over. One we found that is superb is Oli’s Fashion Grill. It seems that almost all restaurants in South Florida live in small malls and Oli’s is the same. But once you walk in, you are in an elegant, beautiful, modern setting with 25 tables and five bar tables inside as well as twelve tables outside. The decor, needless to say, is photos of horses and they are superb pieces of art. When asked, “Why Fashion Grill?” the response was that the food was fashionable. I don’t know what that is supposed to mean but the food was divine! 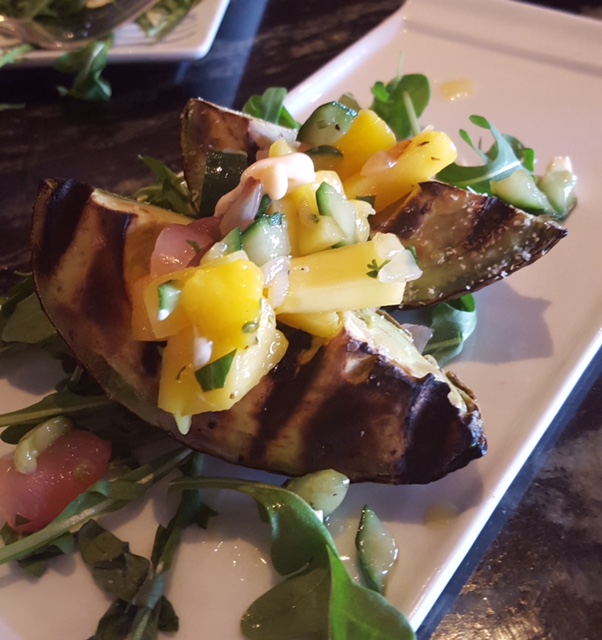 We tried several dishes (and due to the size of each we had plenty of leftovers to take with us). All three dishes were a must if you go there. Grilled Avocados were perfect and we wondered where they found such perfectly ripened ones since we couldn’t find them ourselves. They were served with a mango cucumber salsa and a spicy mayonnaise and melt in your mouth. Then Fried Brussel Sprouts with crispy prosciutto and gruyere fondue were some of the very best Brussel sprouts ever made. The fondue was really a dipping sauce that, although gruyere was definitely there, it was not overwhelming. The last item we had was the Gruyere Chicken Panini, which was chicken, prosciutto, gruyere, arugula, tomato and pesto on rustic Italian bread. It was breathtaking – both in size and presentation but also with just the right mixture of flavors and textures. Yes, we tended to lean toward items with cheese and prosciutto that day but the menu has many other excellent items which some might consider slightly healthier, such as Mediterranean Shrimp Salad, pastas with fish, vegetable salads with quinoa, and many other delicious items. It is definitely a must if you are in the area. 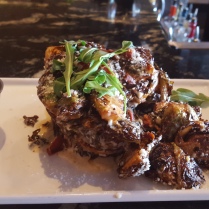 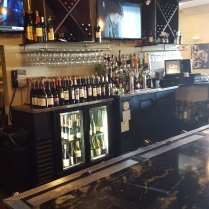 The bar at Oli’s 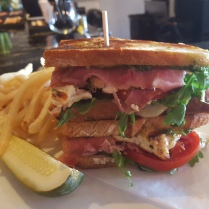 Unfortunately for me, I head back to the frigid weather of D.C., but Super Flashy and his team remain in sunny Florida for a few more weeks to enjoy the sun and fun!

This entry was posted in Uncategorized. Bookmark the permalink.