A delightful dinner at Hermes

Many of you know of the fashion house in Paris called Hermès. It was founded in 1837 as a saddler. It grew into a major fashion house first recognized for its purses such as the Kelly bag, the Birkin, the Bolide, to name a few. Their scarves have also become classics and are usually more expensive as they age rather than losing value. They still make saddles, bridles, and all other equine accoutrements. Their equine line is just as durable as their human leather and silk goods.

They have stores all over the world, but they just opened their DC store downtown at The City Center this week. To celebrate the opening they had a closed event at the store and then a seated dinner at the Andrew Mellon Building on Constitution Avenue. The dinner was for 120. As usual, Hermes mounted an amazing event.

Two long tables of 60 each with a server for every two people. The servers were clearly hired actors or models since they were all the same height and attractive men. From the moment we walked in, it was a full dramatic event. Music and theater lights and the servers in different costumes for each course.

The first course was served by the waiters in metal masks much like front of the mask that the Count of Monte Cristo wears in the movies. The course was Foie Gras Feuilleté with black olive truffle and champagne strawberry gelée layered in two levels.

For the second course, the servers wore gold tall masks and body suits that crinkled as they walked and added to the music in the background mimicking the sound of a quiet crackling fire. The second course was a Veloute d’Or which is a golden cauliflower, charred eggplant purée which was served in a chemistry beaker with a black glass straw.

At this point the glasses were all removed as were the candles (even water glasses to some people’s dismay) and the long black tablecloths were whisked away by being lifted by ten people on each side and pulled to one end and magically folded and whisked away. At that point, the tables were shown to have a white linen cloth underneath. On top of the table cloth were then placed squares of astroturf and then restocked with water and wine glasses. The next course was Pea Crusted Lamb Loin with spring garden vegetables and charred eggplant. The waiters had painted boards on their backs which displayed an artistic version of the mountains of New Zealand which was where the lamb originated. 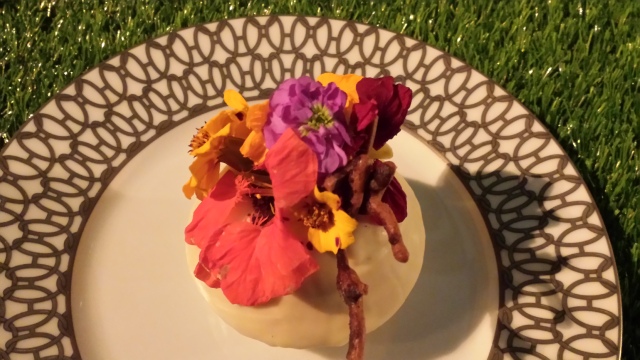 The final course was a Flower Pot which was a round white chocolate sable cookie with fresh raspberries, dark chocolate mousse, salted caramel on the inside and with edible flowers decorating the top. Of course champagne was served as well. The waiters now appeared in white overalls with large cotton hats lit from the inside.

When the actors who served as waiters came out for the final time they handed each of us a bouquet of local flowers and then waved goodbye.

During the breaks between courses, we were entertained by an operatic duet and a single aria accompanied by a pianist. During the waiters entrances and during dinner mood music was piped in.

All in all, it was an amazing performance and was in the tradition of Hermes’ unique and elegant brand.