Turkey on the Brain: How I do Thanksgiving Dinner 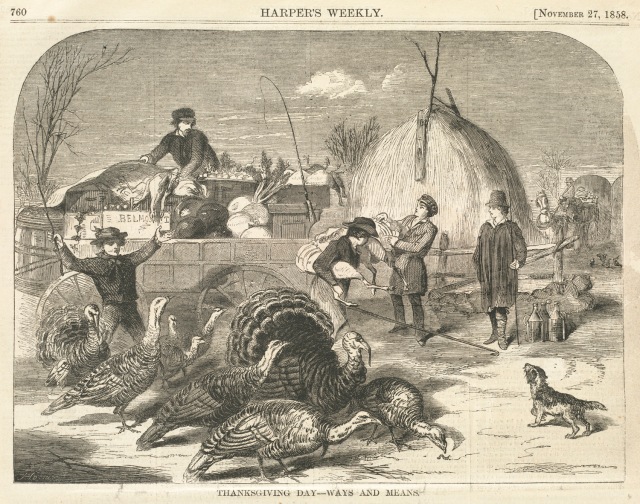 Since this is the time of year when all of us think of food, I decided that for two weeks in a row I would write about it. So, last week was a review and this week I am sharing some of my favorite recipes for Thanksgiving – or anytime one wants a big homemade feast.

When I was a child, my mother found a recipe for turkey that called for basting it with martinis. Of course, the advantage was that one got to drink martinis while one cooked. My memory is that the turkey was black on the outside and raw on the inside but my parents didn’t care! I have incorporated some of that philosophy over the years in my cooking – there is almost nothing to eat that cannot be improved by alcohol.

Here are some ideas for your Thanksgiving:

If at all possible, only buy local, fresh turkeys. They are much better – juicier, tastier, and cook more quickly. I always have the turkey room temperature. And I split the stuffing between inside the turkey and in a separate pan to bake. The inside stuffing is wetter than the baked but when you mix them together they create a perfect combination.

For the stuffing, I pick a fruit theme for the year, which I repeat with the basting and with a dessert. One of my favorites is apple.

Stuffing: Old bread nice and dry, old corn bread (you can cheat and buy the bags of each). The amount depends on the size of the turkey but a 26-pound turkey (which is what I usually cook) requires about 6 cups of dried cubed bread. Then add about 3 sticks of melted butter and about a cup of Apple Brandy. Pour that into the stuffing. Add three apples – the crispier the better – chopped up WITH the skin on (obviously no core), and mix them into the crumbs. Add walnut pieces to taste. Use a stuffing bag to put the stuffing in the turkey. Put the rest in a covered baking dish that needs to be baked about 60 minutes before eating. I use bay leaves, oregano, Italian spices, parsley, kosher salt and pepper to taste in the stuffing. If you use Pepperidge Farm seasoned croutons, you can ignore adding spices.

Baste: Butter – you might need to make more but I start out with two sticks, kosher salt, oregano, bay leaves, parsley, and marjoram should be generously shaken into the melting butter. Add a half-cup of the Apple Brandy. 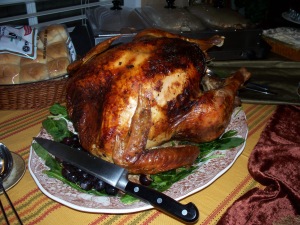 Turkey: Heat the oven to 500 degree. After putting the stuffing bag and stuffing in the turkey, cover the turkey with cheesecloth – a double layer over the legs and wings – baste the whole turkey with your basting butter. Put the turkey in the oven and lower it to 325 degrees. If fresh, the turkey will take about 13 minutes a pound for turkeys larger than 15 pounds. (Smaller turkeys take about 11 minutes per pound.) I ALWAYS put a pop up thermometer in the turkey. They have never failed me but the fancy metal ones that are reusable have. Buy the pop ups in the grocery store and follow the directions as to where to place them.

Baste the turkey every 20 minutes with the basting butter. Make more if you need it. I also turn the turkey around when I baste it. (One side of the turkey is to the back of the oven for 20 minutes and then that side is turned to the front.) It makes certain that it is evenly basted and cooked.

Roughly when you are about a half-hour away from the turkey being ready, put the stuffing in the oven that being baked in a dish.

Once the turkey is done, it should sit on the counter for 20 minutes to settle. This step is very important for the carving. Keep the baking stuffing cooking until the last minute and then mix it in a bowl with the wet stuffing from inside the turkey.

If I use apples, I always have an apple pie served with whipped cream and a walnut sauce – simple syrup with a “wee dram” of Apple Brandy and chopped walnuts served warm with the pie.

To complete the menu, we sauté fresh French green beans with garlic and have either butternut squash or sweet potatoes, twice-baked potatoes and a fresh green salad.

Before Christmas, I’ll share with you my mother’s secret trick for wonderful gravy.

1 Response to Turkey on the Brain: How I do Thanksgiving Dinner