It’s Military Appreciation Month – a nice thank you that the U.S. gives to the men and women of the Armed Services who take care of us for 24 hours a day, seven days a week. Since both my parents were Marines, I have a different perspective than many. 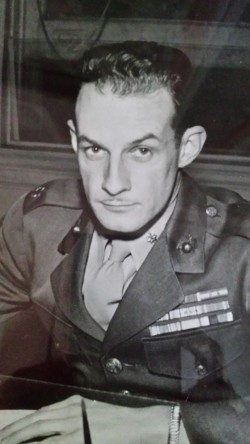 My father, the Marine.

My father, who was one of what Tom Brokaw calls the Great Generation, was a career Marine who served in World War II, Korea, and Vietnam. His combat posts were all in the Pacific during WWII. He earned three Bronze Stars plus numerous other medals that hang in my house. He saw the flag being raised over Iwo Jima and fought in most of the island battles. He died with shrapnel still in his back. He contracted malaria. He loved the Corps and would have stayed in forever if they had let him. He was a typical Marine – disciplined and saw the world in black and white.

My mother, on the other hand, was an atypical woman Marine. She was the life of the party, couldn’t remember any of the commands while in Officer Training School and one day even marched the platoon into the Potomac because she couldn’t remember “halt and about face.” Her role in the Marines was to be the female face. She appeared on “What’s My Line” and “To Tell The Truth.” My father was her boss, but she was all over New York in her uniform with actors, such as Tyrone Power, attending official events.

While in New York, their closest friends were Vince Sardi and the Krindler brothers who owned 21 Club. The men had all been in the Pacific together so there was a strong bond. Rumor has it that my father pulled them out of a sticky situation during the war when being pinned down by the Japanese. (I never knew until I was in my 20s and had a date tell me that having signatory power on a house check was unusual. Nor did I realize that having wine put away at my birth for me to drink at 21 was a special occurrence.)

Together my parents worked with the artist Felix de Weldon who created the statue of Iwo Jima and they were there for its christening. Once they got married, my mother had to resign her commission (old rules were that women Marines couldn’t be married). Their first posting was Morocco where I was conceived.

Until I was 10, and we finally settled in D.C., I traveled the world with them which is probably why I have the travel bug to this day. While my father was in Korea, my mother took us around the world stopping in the civilized and not so civilized places. I was in head-hunters’ longhouses in Sarawak, in Hong Kong, as well as France, Germany, Egypt, Thailand, and many other foreign ports. I remember getting my annual shots aboard U.S. Naval aircraft carriers.

Life as a child of two Marines was exciting and interesting, and gave me an appreciation of the life – both the good and the bad. The parent at home often is the only parent for months or years on end. The parent on assignment lives anythingbut a normal life and misses the support of the family that is far away. Only certain people have the ability to thrive in this life. I was lucky that my parents did. My mother’s rule was “home is where we are on any day” so I felt right at home everywhere.

In those days, there was no email and limited phones. They wrote each other almost every day. Suddenly when he was in Korea and we were in Manila, a letter would arrive through the military post and my mother would put aside 20 minutes to read the letter at least twice. My father always asked about me and how I was doing. I am certain he got the chuckles when my mother would write back, “She learned how to count today on the MaiTai stirrers I saved.”

It was an amazing upbringing, and one for which I will always be grateful.

Semper Fi to all Marines everywhere!