Scandal upon scandal: Can this White House recover? 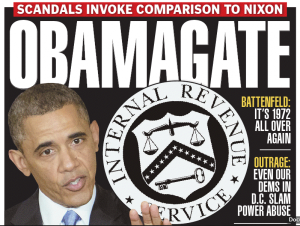 This week the President was hit with one of the worst comparisons an American president can hear — Nixon and Watergate.  It was not Nixon and EPA or Nixon and China.  It was Nixon and Watergate.  That brought home some strong memories since I was in the East Room when Nixon said his goodbyes to the staff and the nation and then walked out onto the lawn and into the helicopter.  That was a very memorable moment to say the least.  As an intern for the National Security Council, one of the many things I learned from this experience was that any White House needs to get in front of potential scandals, issues or negative media coverage.  I find it fascinating that most presidents and most White Houses still haven’t gotten it.

These things rarely blow over. I had several people just last week still telling me that Benghazi was not going to be an issue before the IRS and AP crises broke.  Of course it is if you have two other scandals break.  That is just how the system works.  One scandal can sometimes be ignored and go away — at least for a while.  Two or more within a few weeks and now this President has to be wondering if his second administration is going to accomplish anything since their time will be spent on answering questions, supplying reams of paper, and talking to numerous Congressional Committees.

So when the first issue happens, you take “the bull by the horns,” as the saying goes, and swat it down.  The emails for instance that were released to the Hill a while ago were not published until this week.  It gave plenty of time for everyone to speculate about who ordered the revision to the talking points, which caused months of jabbering.  This White House seems to think they are so far above the public that they don’t have to explain anything or tell the public the truth, as Bob Woodward says.  If they had dealt with Benghazi quickly and efficiently, then the next two would be easier to handle as well. 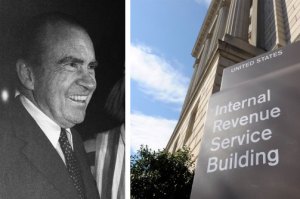 Image via The Daily Beast

Then there is the issue of the IRS targeting conservative groups.  This was a really stupid idea.  Whoever made the decision in the IRS to do this has just confirmed the worst fears of many Americans — the IRS knows too much.  And the plan of the President is to have the IRS overseeing Obamacare.  What part of ridiculous did someone not understand?  Unfortunately for the White House, it doesn’t matter who came up with this idiocy, it reflects directly on 1600 Pennsylvania Avenue.  It gives anyone who has any fear of an over-reaching government more red meat. The President’s eventual outrage was good but why did it take so long? Who advised him to wait?

Next we have the issue of AP reporters’ phones being bugged by the Administration in the name of national security.  As some of you may remember, I am a very strong opponent of leaks that reveal any type of sources and methods items, but I also am a very strong supporter of the right of the press to have sources.  I may get infuriated when a reporter leaks something, but that is the job for him or her.  The person who reveals the classified information is the one who should be punished.  If the government bureaucracy can’t discover who it is, then tough luck and work harder.  Do NOT go bugging reporters.  It will only backfire as we have seen.  It makes reporters more rabid. So why do it?   Someone wasn’t thinking at all.

All in all, this President is not being served well by his staff and by the various departments of the government.  The President’s desire to make government more efficient and useful to the American people seems to be a pipe dream.  It doesn’t matter whether these issues are due to various forms of incompetency or corruption or conspiracies, it is the same result — a government totally adrift with no management.

2 Responses to Scandal upon scandal: Can this White House recover?