When it comes to language, do you know your tones?

I was reminded this week of how many different intonations are used in English.  When I was a university student, I took Mandarin Chinese and kept being told it was so difficult because of its tones – every word had four tones and, therefore, four meanings.  This week I discovered English has a lot more.

Here’s how it became so apparent to me.  I was driving my daughter’s 1998 BMW 328i along MacArthur Boulevard in the pouring rain.  For those of you who know D.C. this is a road that parallels the Potomac River heading out to Maryland.  It is usually a quiet street and even quieter as one goes further north.  The exception is during rush hour.  Luckily this was not during the morning commute so I was the only one on the road.  The car hit a slick spot and spun right around heading the other direction.  Unfortunately, the right rear tire hit the marble curb as D.C. has spent millions replacing perfectly good concrete curbs.  The tire burst, and something underneath bent.  Clearly I needed a tow. 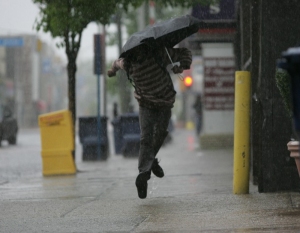 I can only wish I’d been this happy on my rainy day.

At this point I called the insurance company.  Perfectly wonderful USAA said that there was no problem, and they would send a tow truck quickly. “Really?” I said with relief.  That was the first tone.  I meant, “Thank heavens!”  Then in the same conversation, I was asked whether I was over the Maryland line or still in the District. “Really, I don’t know.”  Clearly in this case I meant, “Honestly.”

I waited for the tow truck.  And waited.  After 30 minutes my phone rang and it was the tow truck company asking if I was in Maryland or Virginia.  I responded that I didn’t know exactly where the state line was.  The dispatcher proceeded to lecture me on knowing where I was and to tell me that he couldn’t send someone if I was on the Maryland side.  “Oh really?” I said, clearly highly annoyed and saying that instead of, “You have got to be kidding me.”  After pointing out that the insurance company traced my car and called a D.C. company, Able Towing (don’t ever use), that I must be in D.C., he hung up.

Of course the tow truck never came.  USAA called me to see if he had arrived. I said that he hadn’t and they called and were told he was 10 to 15 minutes out.  It was pouring at the time, and my car top (a soft top convertible) was so soaked that it was leaking so I was getting wet.  “Really? 15 minutes?” Of course, I meant, “Are you sure?”

If only he’d come to my rescue.

Another hour went by with USAA harassing Able Towing and finally up pulls a tow truck.  The driver got out and had me fill out the inevitable forms – as if he had not been told by the company where he was taking the car or what model it was, etc. etc. etc. So he then tried to pull out the metal line that hooks to the car to haul it onto the flatbed.  It was stuck.  He had to hand unroll it and try again.  Three times he tried and then finally he got it out and had to stretch it out to its end in order to trigger the automatic device that would roll the car up onto his truck.  “Really?” was my word.  Clearly meaning, “I can’t believe this BLANK nightmare!”

Now, you can say that I use the word really too much.  It replaced several swear words in my mind that day, but it is a great demonstration of why the Chinese say English is the most difficult language to learn.  We have more tones than they do.  So, now you all know you can go learn Mandarin and have no problems – at least with tones!

P.S. NEVER use Able Towing in D.C. and , if you can, use USAA for insurance. They are the best!

This entry was posted in Uncategorized. Bookmark the permalink.