Mid-Winter Break: How about a trip to Palm Beach?

Palm Beach in February – a perfect break from a dreary, wet D.C. I went down to Florida to see a friend and go to an amazing horse show at Wellington.  For some reason, I had never been to either.  Everyone I know looked at me as if I was from Mars when I mentioned that I had never been to Palm Beach.  And all my horse friends thought I was a complete idiot that I had never gone to Wellington — the center of all things equestrian for a few months each year — during the cold months in the north.

My first impression of Palm Beach: little to no traffic.  The traffic that existed, however, were Rolls, Astons, Bentleys, BMWs, and Jaguars.  Anything else stood out like a sore thumb.  The second thought was how small and elegant it was.  On the road were few badly clothed people, and the issue of obesity was in reverse — every female was clearly watching her figure.  (The used clothing stores only had size 2.) 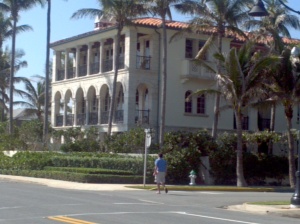 It is a beautiful tiny place.  Exquisite houses (Alex Garfield found her future home.), many designed by Addison Mizner, are on every block.  The roads are lined with palm trees and, as I mentioned, the parked cars are primarily the best of the best.  The beach at the end of Worth Avenue is relatively unoccupied, and one can take a long walk on the edge of the water without dealing with too many humans.  There were sharks in the water, however, which is why we didn’t go in but admired the beautiful water from the edge.

We weren’t there long enough to try all the recommended restaurants, but three were great.  Ta-boo, which has been there for at least 30 years, is a delightful bar on Worth Avenue.  Typical Florida plants abound so you feel at home sitting at the wood bar or in one of the rooms of tables.  (You can try to get the window table in order to have two venues for people watching – inside and outside.)  I always prefer to sit at the bar and talk to the bartender.  They usually have all the scoop.  Ta-boo is full of characters – both local and imported.  Some are delightful such as the South Carolinian couple that rescued me by sitting between a woman who looked like a cartoon of how not to have plastic surgery and myself.  (The misfit was on a rampage because some man she picked up had not paid for her drinks and had left the bar.) If you go there, get the crab tower – fresh crab, delicious avocado with a slightly piquant sauce.  I wanted to lick the plate. They make a perfect margarita also.

Another wonderful restaurant was Café L’Europe on South County.  All dressed up for the Oscars the next night, the place was hopping.  Although we had a table reservation, as soon as we entered we knew the bar was the place to be and be seen so we canceled the table and ate at the bar.  Great bartenders and fascinating clientele.  Beautifully dressed in a casual vein, one could tell that no recession had hit Palm Beach this year.  The guests that glided out of Rolls, Astons, and Bentleys (we walked by the way) were dressed in Armani, Hermes, and Givenchy.  The jewelry was understated but Harry Winston, Graf and Tiffany would be happy seeing the designs. Everything at Café L’Europe was beautifully done.  The service was impeccable and the food excellent.  I highly recommend the coconut shrimp and the Wienerschnitzel.  Delicious red French wines are on the wine menu, and the bartender is well versed in the list.

The last place we tried was the Polo at The Colony Hotel which is right by Worth Avenue.  Although it is a hotel restaurant, it could easily stand by itself. It has an amazing dry aging process for beef and you could tell when you ate beef there that it was done in house.  The Carpaccio (but ask for it to have no onions on it), or any steak is delicious.  We, once again, sat at the bar, and watched the Oscars.  As we proceeded to pretend we were fashion commentators, more people gathered round to help us critique the outfits and jewelry.  If you’ve never done it, try being a fashion commentator while watching a show like the Oscars or Golden Globes.  It gets all of one’s cattiness out of the system – at least for a week! 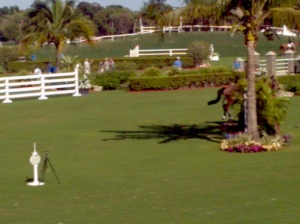 As I mentioned, I also went to Palm Beach for a horse show at Wellington.  What beautiful animals!  Hermes sponsored a Jump Derby that had 19 jumps and was contested by 19 riders (20 entered, but one scratched.)  Irish, German, British, and American horses competed with riders from America, Europe, and South America.  Amazing four-legged creatures that sailed over 6-foot jumps with no problem, taking their rider along for a very fast ride.  The winner won in 1:38 seconds over 19 jumps, which was extremely impressive.  And what was especially wonderful is that the rider was the owner of the horse – no big breeding stable with a hired horseman, but someone who owned and cared for and knew his horse’s every thought and ability.  Bravo!

Go to Palm Beach — at least for a long weekend — and walk Worth Avenue, drool over the cars, clothes, and all sorts of exquisite pieces and eat well.  The locals are amazingly friendly and helpful, and it is a taste of a civilized life at a civilized pace that you rarely see anymore.

1 Response to Mid-Winter Break: How about a trip to Palm Beach?