I got a great compliment the other day while decorating my Christmas trees.  Someone asked if I would explain — in simple terms — what is happening in the Middle East.  The fact that this person thought I was capable of doing what is almost impossible was such a wild idea that I decided I should try it. So here goes … 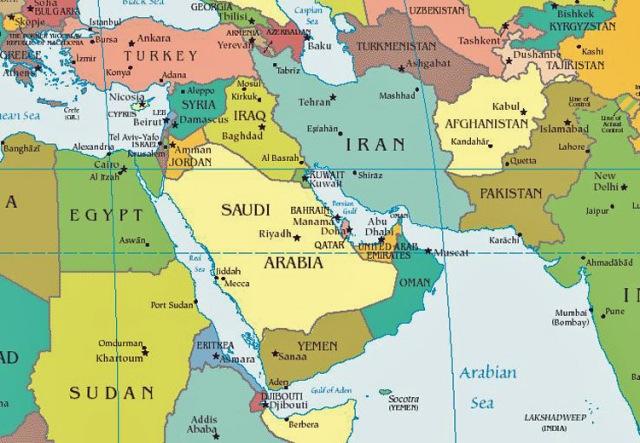 Look at the region as a recipe for disaster – two major religions, one of which has still not gone through any major reformation to make it more easily adaptable to the modern world, a power in Iran that is desperately grabbing for influence and is helping every bad actor that can be found, great poverty, little history of process and government rules and the rule of law, and a long history of dictators and kings.  That is a list of ingredients that leaves little hope of easily blending them together in a realistic dish.

Like many sauces where one has to blend a few ingredients together at a time before you can have the result of an edible preparation, the Middle East has to be taken apart and dealt with as parts of a whole with a great deal of patience.

The overarching issue is still Israel and Palestine.  The U.S. has not done much to guide the peace process for years – and, guess what, nothing much has happened to promote it.  All who are rational agree that we need a two state solution.  Yet nothing is happening – and it won’t unless the US and its allies step in and force the issue.  We can have another temporary peace for a few years (we have had many of those over the last 40 years) but it will break at some point because there is no solution and Palestinians see no hope of financial growth and no end in sight to their own nation.  That is the basic recipe for continued catastrophe.  Israel will not make it happen unless it is forced to do so.  Only if the United States seriously steps in will we see progress in this area.

Another component is the extremes of Islam and the two divisions of Sunni and Shia.  Until the religion can adapt to modern day and not have large parts of its followers believing that the world should return to the seventh century, there will be conflict. When one adds that some want to eradicate the Jewish state of Israel, there is a constant tension and the components of the dish are not likely to congeal. American policy should be to help the moderate voices – and they exist – to find their own solutions for bringing one of the three great religions into a more harmonious mixture.  Non-Muslims cannot make the changes but they can support those within the religion who want to modernize and find common ground.

Another part of the recipe in the region has been benign neglect by the U.S. to help the founders of the Arab Spring who were moderate, modern voices in the area, which has let the more radical, Islamists take over the cause in many of the countries.  Egypt, which at its core should still be an ally of ours and Israel, was ignored as it started down its path away from dictatorship. What started as a modern revolution was hijacked by the Islamists.  Now the President of the country is trying to start an Islamist dictatorship, which is why we are seeing demonstrations again.  How the U.S. deals with this issue behind the scenes will be critical.

And then one has the minor issue of the revolution in Syria which is being fueled by Iran as Syria has been Iran’s ally and bulwark in the Levant region.  So Iran will continue to send weapons and troops to Syria to keep Assad hanging on.  It is more important to Iran to do that than to deal with its deteriorating economy since if Assad is forced out, Iran has only Hezbollah left as an ally.

So, all in all, it is a very depressing picture if one is looking for stability in the near future.  If one is an optimist, there are several parts of the recipe where the U.S. could play a major role in getting the ingredients right.  The question is whether the current Administration is willing to spend the time and capital on the region.  The first four years of this leadership has chosen to ignore the region as much as possible.  Who knows what the view will be for the next four?  To continue the bad analogy – they can either make a smooth béchamel sauce or have separating gravy!