Fashion Week: Style to die for

New York Fashion Week is to die for and the Mecca for any and every fashionista. Ms. Alex Garfield would have been in attendance, but (as usual) she was somewhere “very secret.” 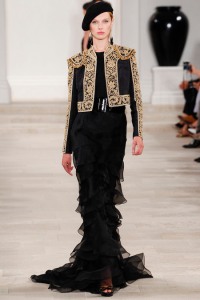 The beginning of September is when we get to see both the absurd and the sublime during NYFW.  Ralph Lauren once again had his signature elegance and flare – this year the toreador played a major role in his look.  Diane Von Furstenberg also showed an elegant, feminine line.  Then there were the clothes that few over 20 and under 6 feet tall would ever wear on the street – Jason Wu with lace on short fluffy dresses; Philip Lim with his florals mixed with strange boots; and Tory Burch with incredibly short shorts.

Listening to the fashion pundits left one with the following overall picture: sleek, leather, darker hair, shorter hair.  They added that geometric was bigger than florals and that if a woman wanted to project power, go for a more classic look with a kick such as a white Oxford shirt with a black leather pencil skirt.  According to the hairdressers and makeup specialists short dark hair, or blond with lowlights instead of highlights, is in with smokier eyes and darker lipstick for the winter – or none at all if you are able to do it. (That is a nice way of saying if you are young enough to carry off the look! 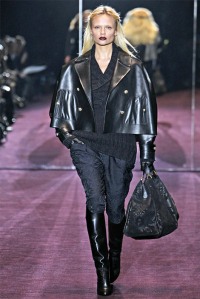 The other big trend is the riding look.  Traditional riding breeches with boots are big. They are copied from traditional English dressage and hunting or field boots.  Tods, Gucci, Cole Haan, Fendi, Givency, Tory Burch, Bottega Veneta all have riding boots out this year.  Add a tweed jacket and look as if you’re heading to the barn.  For those of us who ride, it is great since now we can look as if we are being fashionable even if we are heading to ride.  If you like this look, here’s a hint – don’t buy the breeches from Ralph Lauren.  Go to Dover Saddlery and pay a great deal less for the same pant!

Luckily it also seems as if the glow-in-the-dark fluorescent colors have disappeared.  Neutrals with splashes of strong colors predominated the fall looks.  Diane Von Furstenberg’s show had black and white with beautiful ruby red.  Orange was added as an accent color for the spring.  Ralph Lauren’s colors were the same with the added touch of gold and silver for the evening. 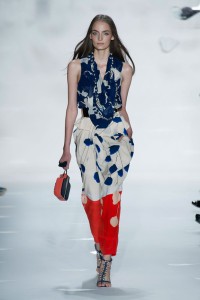 For those of us who tend toward the more classic looks, Ralph Lauren and DVF met our standards.  Dior had some of the classic but added some floral prints with full short skirts for his Resort line which again wouldn’t work on most ages or bodies.  Dolce and Gabbana went over the top with ruffles and gold braid and puffed sleeves that only belong on stage.  Spain and the toreadors also influenced the line but it went far beyond the sleek elegance of Ralph Lauren and into the age of fantasy.

Shoes for the fall also seem to have been most influenced by the classic look with a twist — saddle shoes with stiletto heels or a simple black pump with spikes all over or an evening pump with feathers on the heel.  Booties are once again in and Alex loves the one that zippers boldly up the back.

Since the shows had so many styles Alex loves, she will be pinning many of her faves on Pinterest.  Be sure to check it out!

What were some of your faves from Fashion Week?  I’d love to read about them in the comments below.